The week leading up to December 17 is known in Konya, Turkey as the Mevlana Festival, in celebration of the ‘urs of Celaladdin Rumi.

‘Urs is an Arabic word which can be translated as “wedding day;” in this context it refers to the death anniversary of a Sufi saint, or revered Islamic mystical figure. The symbolism of “’urs” stems from Sufi symbolism in which marriage is akin to union with God following a long and deep relationship in life. In any event, the death anniversary of the mystic and poet known widely in the ‘West’ as Rumi, and in Turkey simply by the honorific Mevlana (sometimes accompanied by the grander honorific Hazreti, a religious title indicating deep respect, commonly used for prophets) is on December 17, and so a group of Fulbrighters traversed to Konya, located in South Central Anatolia, the site of Rumi’s tomb. (* note: generally, saint’s death anniversary’s are celebrated according to the Islamic (lunar) calendar; however, because it’s Turkey, it is always celebrated here on the evening of the 17th.)

The journey was rather easy for the K-Town crew- there is a high speed train from Ankara to Konya that only takes a couple hours. We were fortunate enough to stay with a friend of our Fulbrighter cohorts there. While in Konya, I had a series of once-in-a-lifetime opportunities, the most random of which being that I met and shared a meal with a Turkish woman (and former Fulbrighter to the states!) named Tess! To say Tess is a rare name in Turkey would be an understatement; hers is actually a nickname for ‘Teslime,’ (pronounced tes-lee-may), a beautiful Turkish name which means something like ‘striving for God.’

Konya had been at the top of my list of destinations in Turkey from the get-go. I read some of Rumi’s poetry and studied his philosophy and tariqat (Sufi brotherhood, the Mevlevi’s) extensively in my Sufism seminar in college.

Quick side note for those reading with an interest in Rumi and Islam: if you can, read the translations done by Jawid Mojaddedi of Rutgers University. Unlike the more widely known Coleman Barks, J.M.’s translations are richly informed by the tradition from which Rumi is writing, and symbolism and allusions are thoroughly researched and annotated (rather than eliminated). What’s more, Prof. Mojaddedi translates from the original Persian into iambic pentameter, which, besides being an incredible linguistic feat, is the closest in English (culture and literature) to the rhyming couplet ‘mesnevi’ (in Arabic, mathnawi) poetic form.

The activities of our trip were centered on the celebrations of the festival (‘urs) and included two major components: visiting what is now the Mevlana Museum and attending a sema, more popularly known outside Turkey as a Whirling Dervish ceremony.

The Mevlevi Order (tariqa) was established in Konya following Rumi’s death by his son, Sultan Walad. Shortly after the establishment of the Turkish Republic, Ataturk decreed the disbandment of all Sufi (mystical Islamic) orders in Turkey (in 1925). At this point, all Mevlevi tekkes (‘lodges’) were shut down. Many have since been converted into mosques (as I witnessed in Eskisehir), or into museums which are operated by the Ministry of Tourism and Culture (as in Galata in Istanbul, or in Gaziantep). The most notable of these museums, of course, is the Mevlevihane and site of Rumi’s tomb (the center of the Mevlevi order) in Konya, now known officially as the Mevlana Museum. 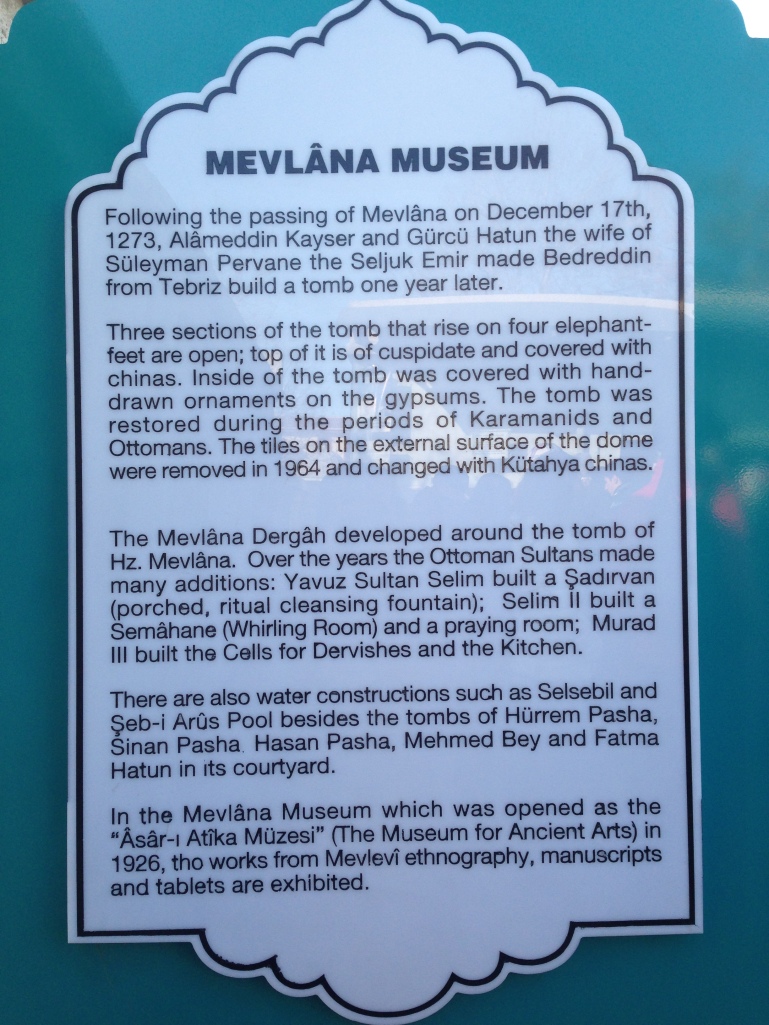 The Ministry of Tourism and Culture oversees not only the operations of museums dedicated to the ‘formerly’ active Mevlevi order in Turkey, but they also control what are now performances of the Mevlevi Sema (Whirling Dervish ceremony) (performances, as opposed to ritual practice). Starting in 1953, the government began permitting replications of the ceremony for the purposes of tourism, initially only in Konya during the week of celebrations surrounding Rumi’s urs. This has since exploded into a major sector of tourism in Turkey—every guidebook, pamphlet, and website will tell you that seeing one of these ceremonies is a “must-do,” and many people across the globe are able to watch touring troops who perform the ritual. From the website of the order (which continues operations across the globe):

In sum, the sacred whirling prayer ritual of the Mevlevis has been largely taken over by the Turkish Government for the purpose of promoting tourism. The Government has little interest in lifting restrictions on the Mevlevi tradition: all it has wanted from the Mevlevis during past decades is to provide good musicians and whirlers (semazens) for Sema. At the present time, excellent musicians have been trained at schools and universities in Konya to play classical Mevlevi music, and there have been new generations of trained whirlers as well. As a result, there is a smaller percentage of musicians and whirlers who view themselves as Mevlevi (or who have had any additional Mevlevi training) than in the past. This matters little to the Turkish Government, which regards Sema as a form of “traditional Turkish folk dancing.”

Simply put, what tourists witness when they travel to Konya, Istanbul, or elsewhere in Turkey is not regarded as an authentic ‘sema’ by practicing Mevlevis.

The Mevlana Museum is the site of the former the headquarters of the Mevlevi order, and the tomb of Rumi (along with numerous other influential figures, including his father and son, and many others). The museum is a direct conversion and appropriation of the former lodge, as a museum space. The dervishes quarters are repurposed as viewing rooms for artifacts, organized by type or theme (musical instruments of the Mevlevi Order, paper documents, personal effects of Sultan Veled, ceremonial clothing, etc.) as well as a few rooms (as well as the kitchen) which are arranged “as they were” when the Order was legal. These are posed re-enactments, complete with dervish mannequins posed in ‘typical’ behavior misc-en-scenes— frozen in time.

What I’ve described above greatly colored my experience in Konya. Yes, the ceremony was beautiful. The information the museum imparted was thorough and well organized. But (for example) did the ceremony need a state of the art sound system and LED light display?

What did floating floral images of ebru (the Turkish art form of paper marbling) have to do with the union with God the ceremony represents? I wondered what Sultan Walad would’ve made of the booths full of artwork, jewelry and chotchkies crammed into the Cultural Centre lobby, or the jugs of (alleged) ‘zem-zem’  water available for purchase on the streets of Konya. 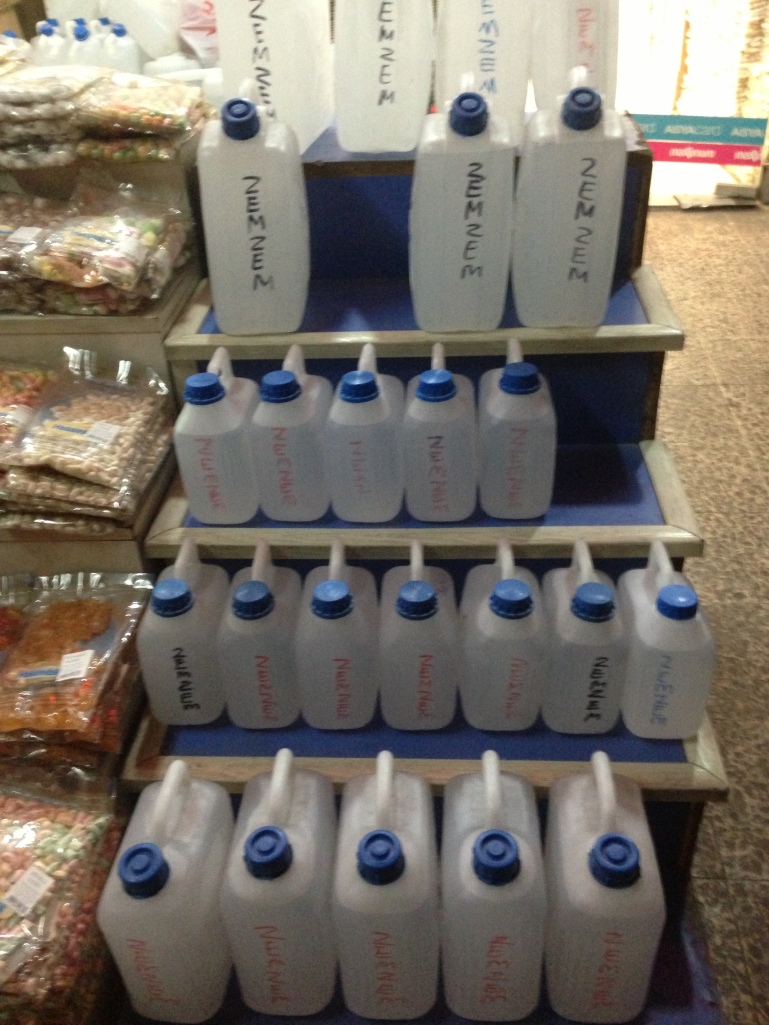 For that matter, I especially wondered what my hundreds of fellow audience members thought of it, particularly those who were moved to tears during the ceremony, those weeping and praying at the site of his tomb, those who’d memorized and cherished the verses of a man who has inspired such a rich (and very much living) tradition….

Did any of that have anything to do with the tomb and ceremony I had traveled and paid money to witness? And I was paying money…

Postulations about the tension between tradition and modernity are thrown around a lot by scholars in the humanities and social sciences…. My questions following the weekend weren’t quite so black and white. What of spectacle? What of contemplation? What of commercialism, for Christ’s sake?

Many questions from this magnificent weekend persist for me, and I hope to potentially conduct further research to understand the contemporary relationship between the Mevlevi tradition and the Turkish tourism industry. I’ll conclude this post with a short video of a man playing the ney (reed flute, a very special instrument within the tradition) from my visit to the Mevlana Museum, and one of the most famous verses from Rumi’s Mesnevi (taken from The Masnavi: Book One by Jawid Mojaddedi (pg. 4).

Note: The man in the video is a visitor of the museum, not employed or endorsed in any way. In retrospect, this impromptu performance was the most meaningful experience of the entire trip for me. This was not a professional whirler, or a staid and (forgive me) tacky mannequin, but an act of devotion. Disturbingly refreshing, and hauntingly beautiful.

About the heartache being apart has meant

‘Since from the reed-bed they uprooted me

My song’s expressed each human’s agony

A breast which separation’s split in two

Is what I seek, to share this pain with you:

When kept from their true origin, all yearn

For union on the day they can return.