But everything exposed by the light becomes visible—and everything that is illuminated becomes a light. Ephesians 5:13 (NIV)

God is the Light of the heavens and the earth; the likeness of His Light is as a niche wherein is a lamp (the lamp in a glass, the glass as it were a glittering star) kindled from a Blessed Tree, an olive that is neither of the East nor of the West whose oil wellnigh would shine, even if no fire touched it; Light upon Light; (God guides to His Light whom He will.) (And God strikes similitudes for men, and God has knowledge of everything.) 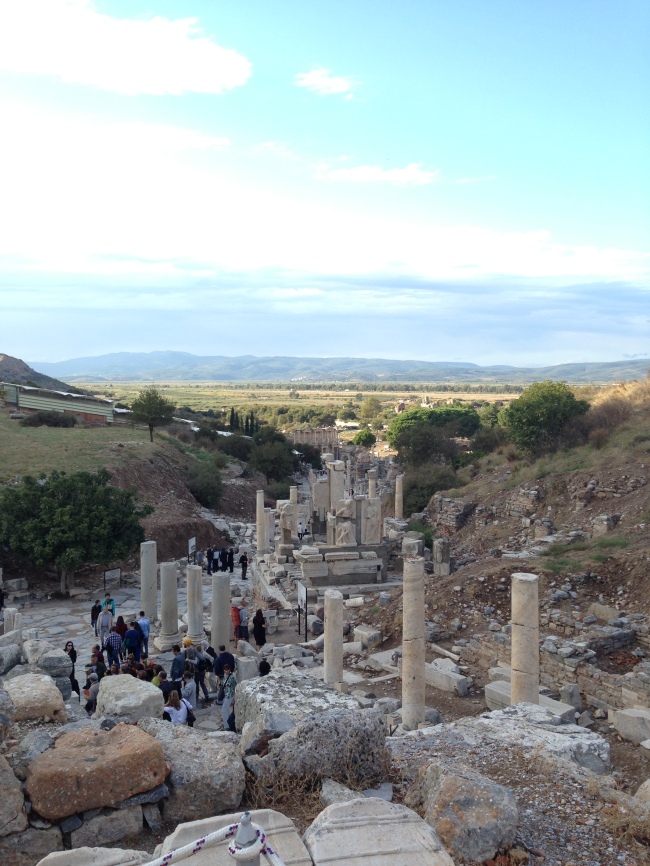 On our final day in Izmir, at the end of our whirlwind Bayram vacationing, my friend and I woke up early and hopped onto one, two three cheap buses that took us to Efes, the biblical Ephesus, by way of the tourist town Selçuk, where we stopped for lunch after bus #2. I’m sincerely hoping for an opportunity to return to this city, which is chock full of historical and religious sites we didn’t have time to explore, including the burial site of St. John the Evangelist on Ayasoluk hill (Ayasoluk meaning Divine Theologian, aka St. John), the Artemision (the sanctuary/temple of Artemis, one of the Seven Wonders of the Ancient World), and Meryemana, or house of Mary, an alleged site of residence for the Virgin Mary (some theologians argue that she accompanied John when he went to Ephesus). The house is now a chapel which is frequented by Christian and Muslim pilgrims alike, as “Mother Mary,” as she is known, is a revered figure in the Islamic tradition as well; indeed she is mentioned more frequently in the Qur’an than the New Testament. Trips to some of these sites are accessible, and frequently included within package tours of the area offered by tourism agencies; however, since my friend and I opted for the low-budget version of the trip, the extra taxi rides etc. to these sites were forgone.

What we did see, however, was potentially the largest and best preserved ancient city in the Mediterranean region: Ephesus. Perhaps the most mind-boggling part of the whole experience was the knowledge floating in my head throughout my visit that, according to the Ephesus Foundation, ONLY 10-15% of the site has been excavated!! The implications of this were clear as restoration and further excavation efforts were clearly visible throughout, but… wow. 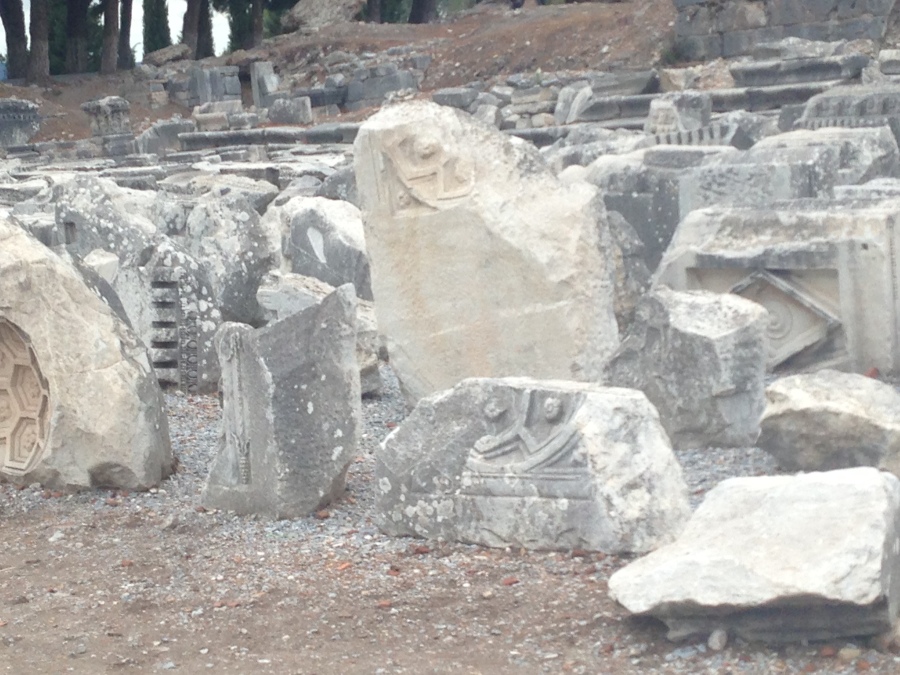 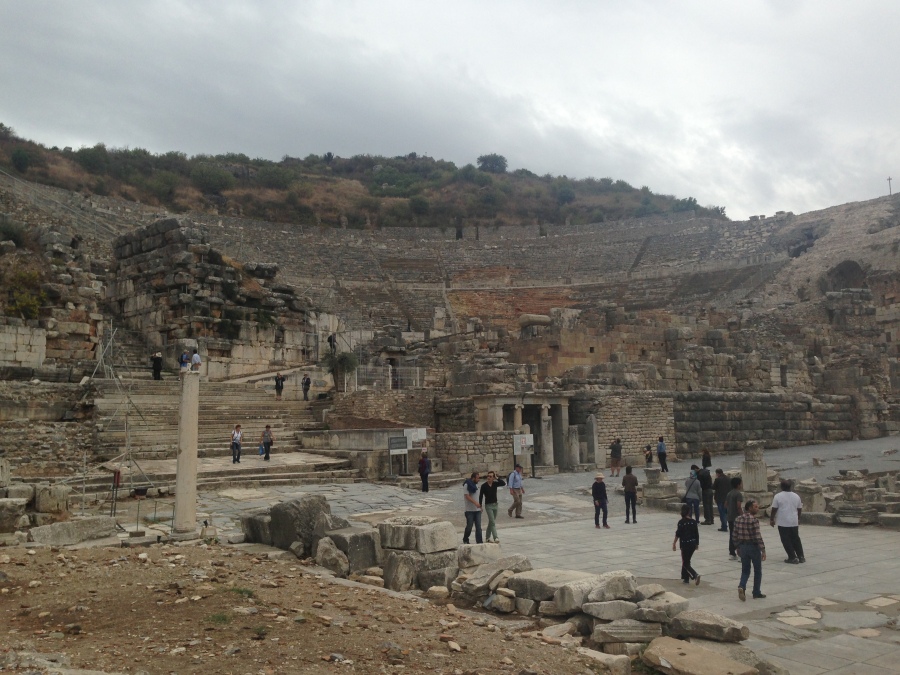 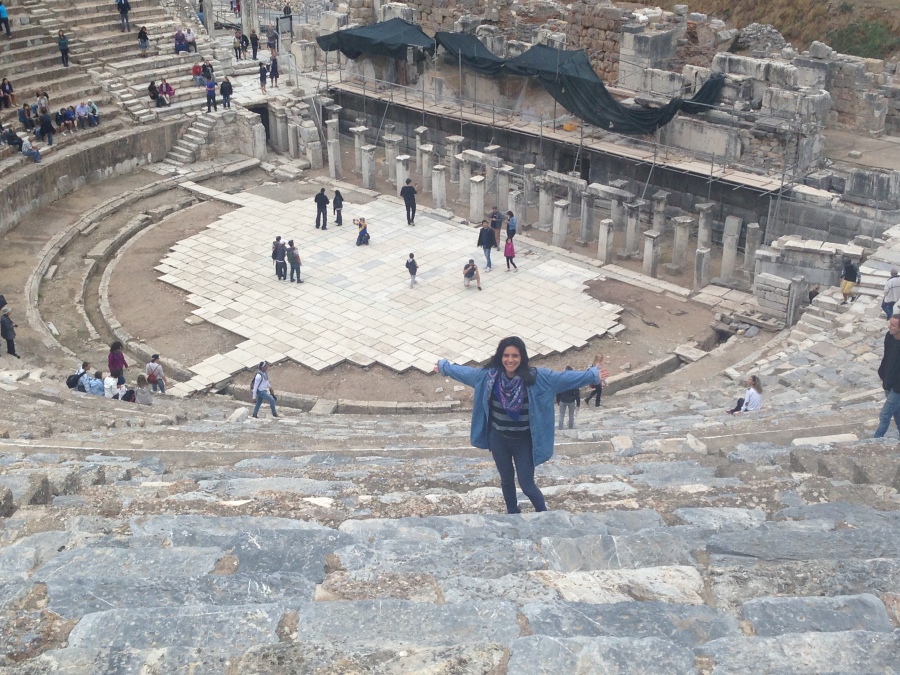 “As the capital of Roman Asia Minor, Ephesus was a vibrant ancient city with a population of over 250,000 inhabitants. Counting traders, sailors, and pilgrims to the Temple of Artemis, these numbers were even higher, meaning that in Ephesus one could encounter the full diversity of the Mediterranean world and its peoples.”

The Ephesus site has two entrances, and you go through the site as though walking through the city. Technically we went “backwards,” but that’s where the dolmus dropped us and honestly, it didn’t matter (and more on the rewards of doing so later.) Our tour began near the Great Theatre, Stadium, Gymnasium of Venus, and ‘Harbor Street,’ pictured above.

Unlike Termessos, the city I visited near Antalya, much is known about the ancient history of Ephesus, and is widely online. Though it was then a port city, years of silting contributed to the city’s decline, despite efforts of those including Attalus II of Pergamum, Nero, and Emperor Hadrian, “…swamps developed and the port was lost…” (Hence the area known as Harbor Street which now leads to an agricultural plateau rather than the Aegean Sea. Today one must stand at a high elevation (from the Great Theatre, for example) to view the sea from a distance. However, “in the future, Turkish authorities are planning for war against the silt accumulation that defeated all previous Ephesian civilizations…” Good luck with that. 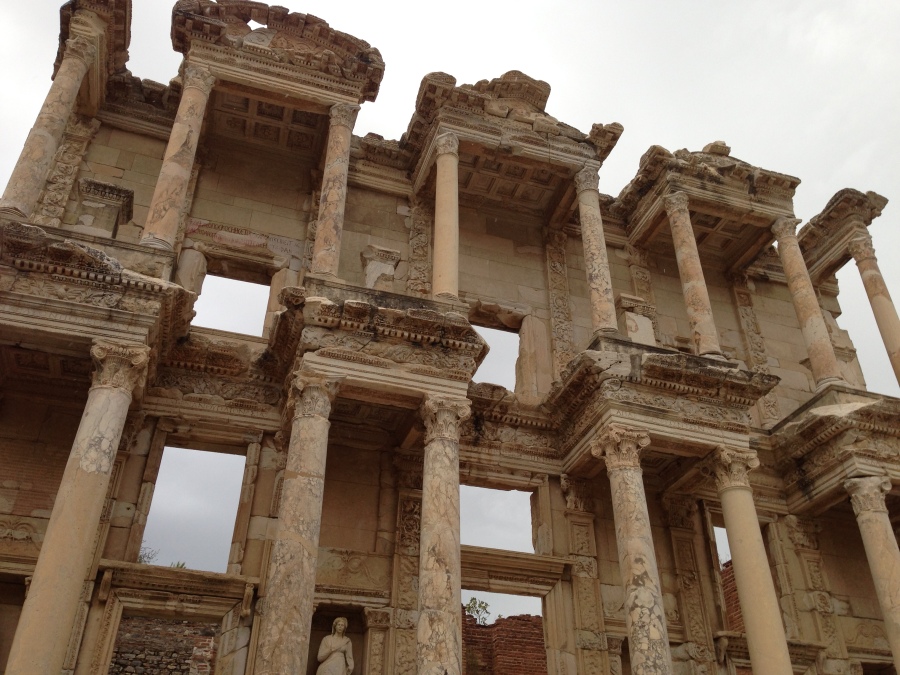 Shortly up the way from the Stadium is one of Ephesus’ main attractions, the famed Library of Celsus. Celsus was the third largest library of the ancient world, capable of holding 12,000 scrolls. Unfortunately, the statues you see in these images are replicas- the originals are in Vienna at the Ephesus Museum there; the Austrian Archaeological Institute was responsible for the restoration of the Library…. incidentally, they’re also continuing work to the present on the Great Theatre.

Also in the vicinity of the Library are the Lower Agora, (pictured below) the brothel (love the title and description on the placard, below,)  and the Terraced Houses, which we opted out of due to time. 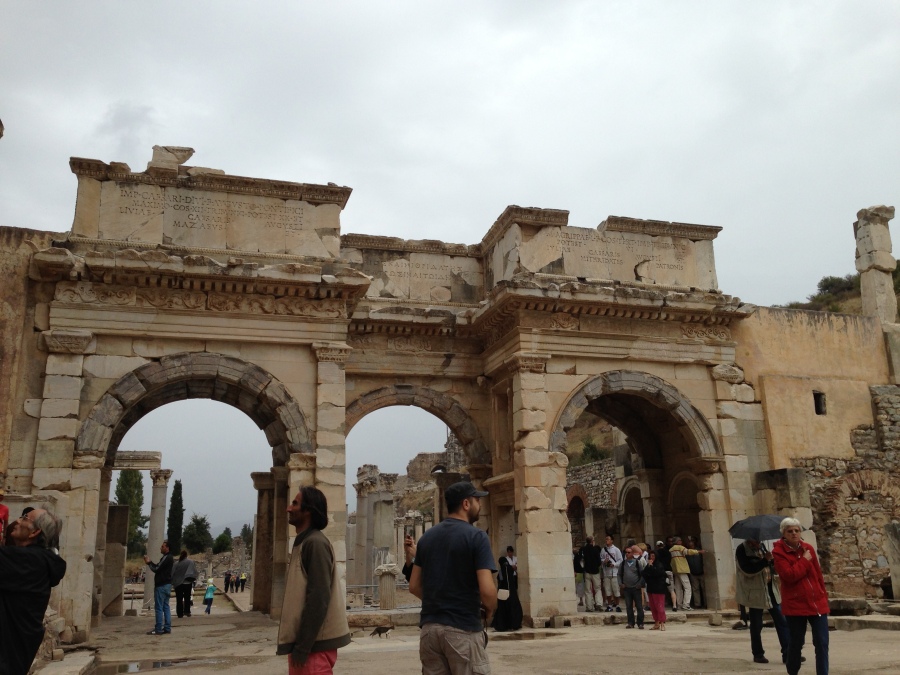 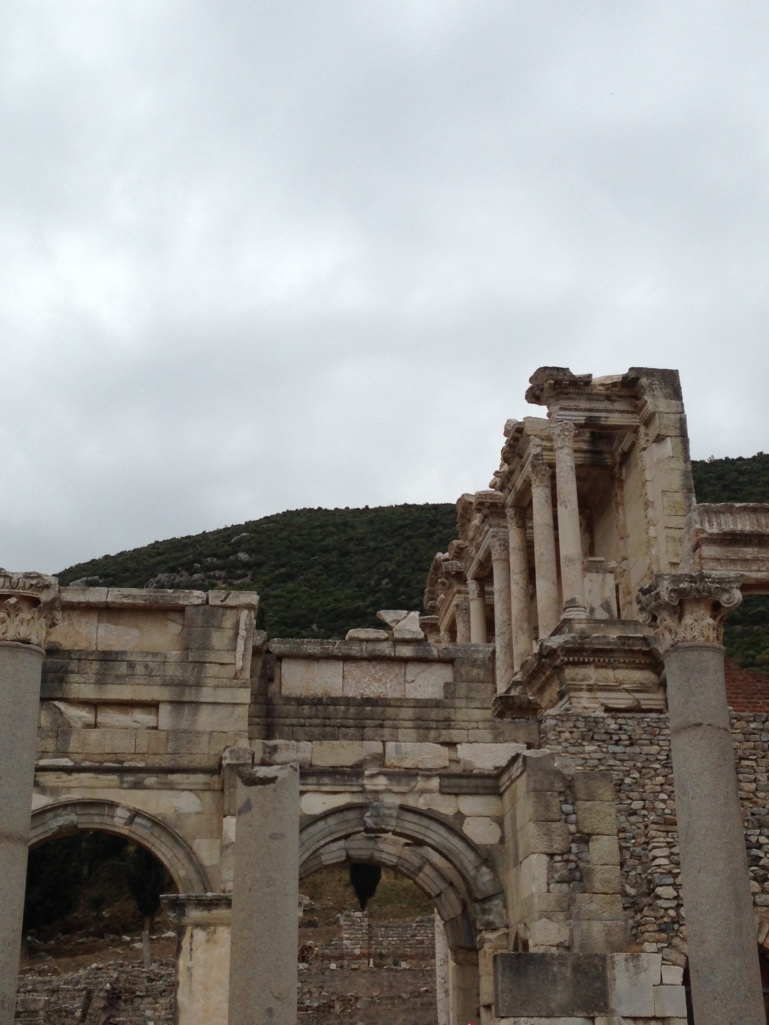 Now this is what I call the lap of luxury (latrine): 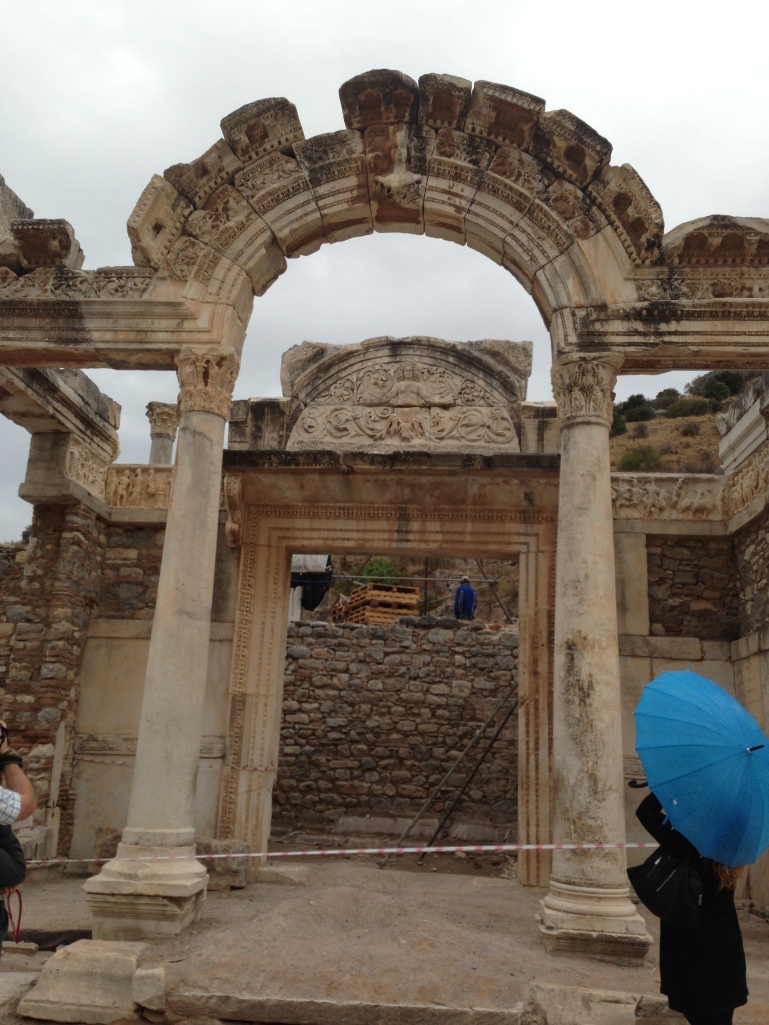 You may find the Temple of Hadrian (above and below) a little more glorious than the pre-modernity potties (to each his own). Architecture fiends, check out the central keystone (Look Ma! No mortar!).

Here are some more beautiful sites (mostly around Curates Way I think,) including this stoae, directly below, the colors of which blew my mind and a cat, because you didn’t really visit Ephesus if you didn’t take pictures of the Cats of Ephesus (incidentally, the name of an article in the TCDD state train transportation complimentary magazine, and also the title of this lovely coffee table book… seriously). 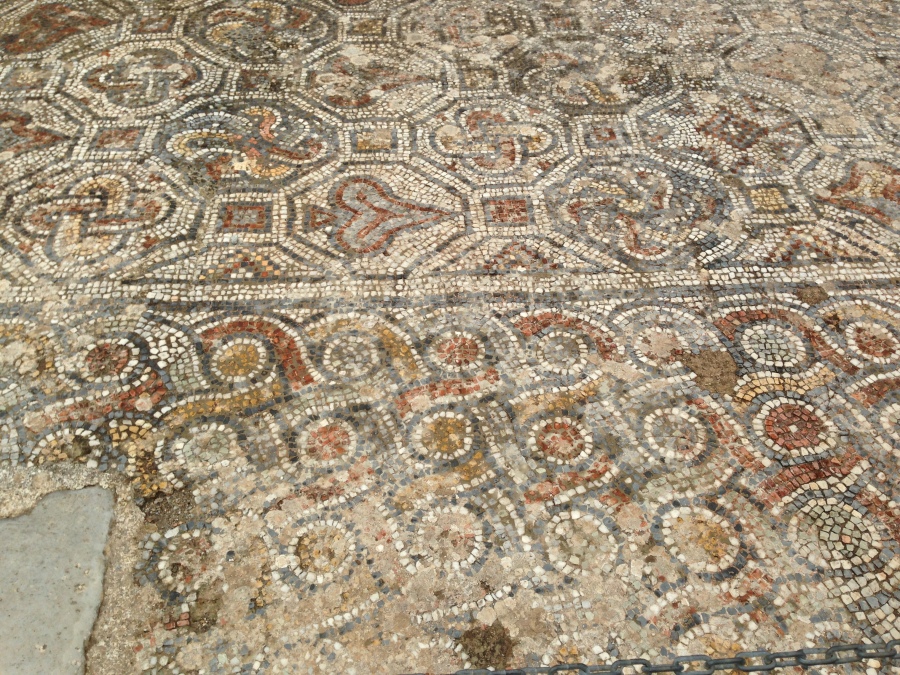 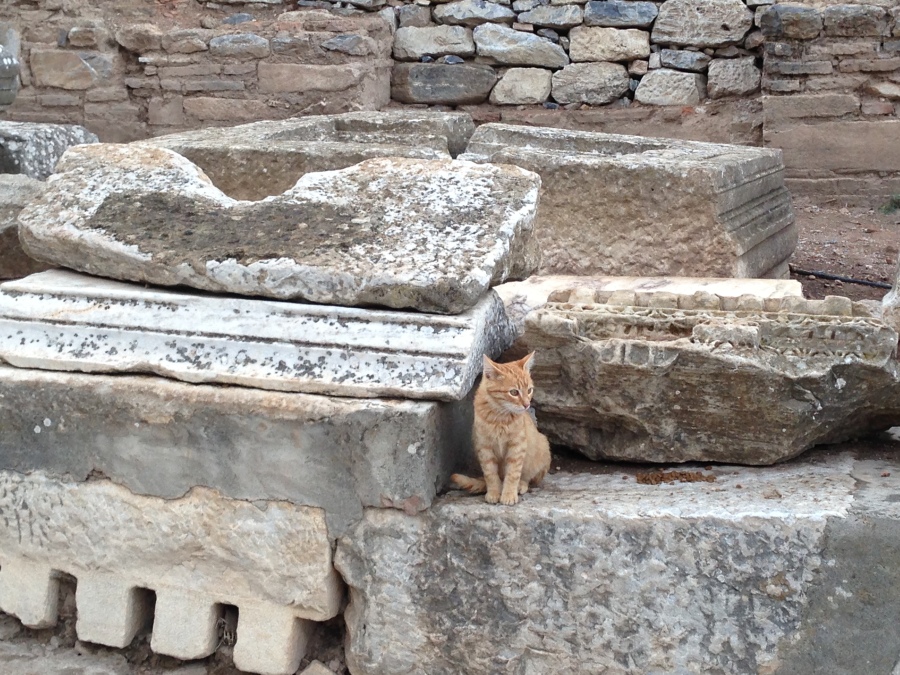 “Wow, this is a big archaeological site,” you’re thinking. “She must’ve had a difficult time picking photos that captured it’s essence so she didn’t make too long of a blog post.” Yeah. But there’s more (now occasionally featuring humans!): 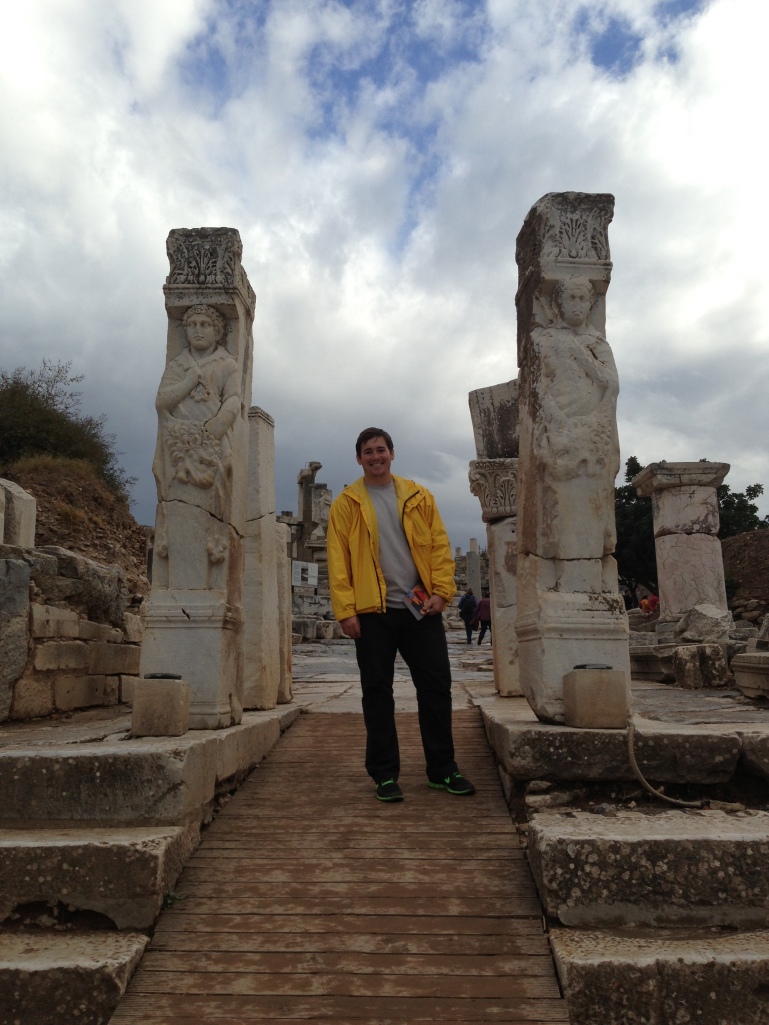 So after walking up the long path pictured above, we eventually reached the Upper Agora and the Odeon, one of the original homes of forensic mastery, and a debate nerd’s dream. 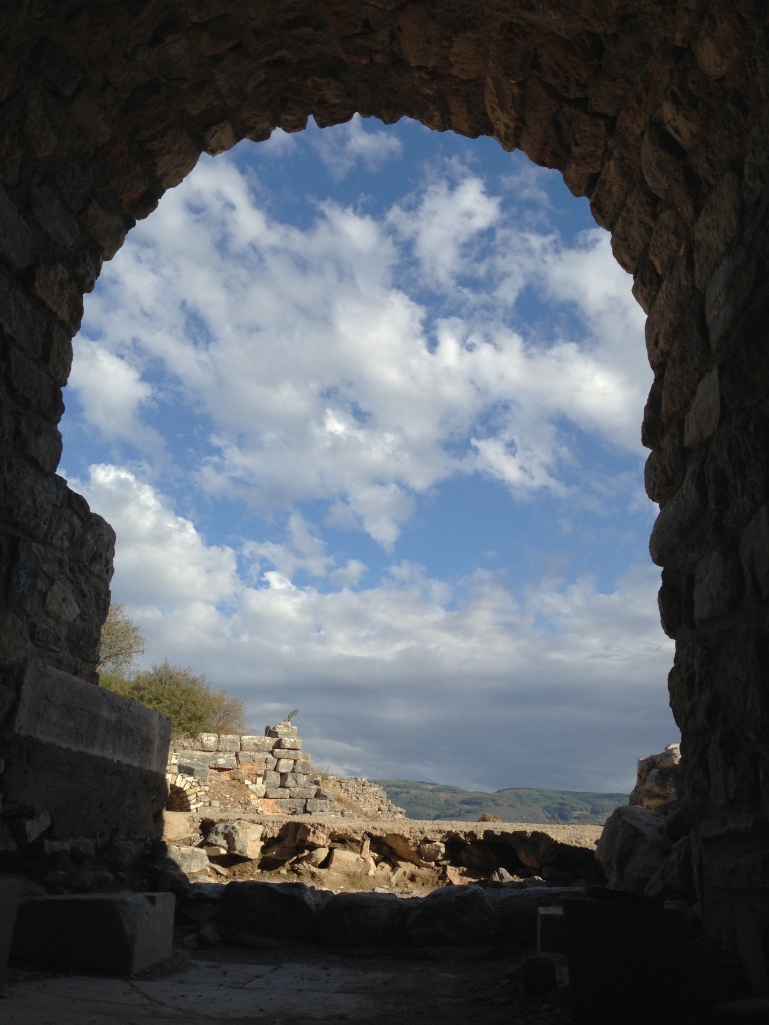 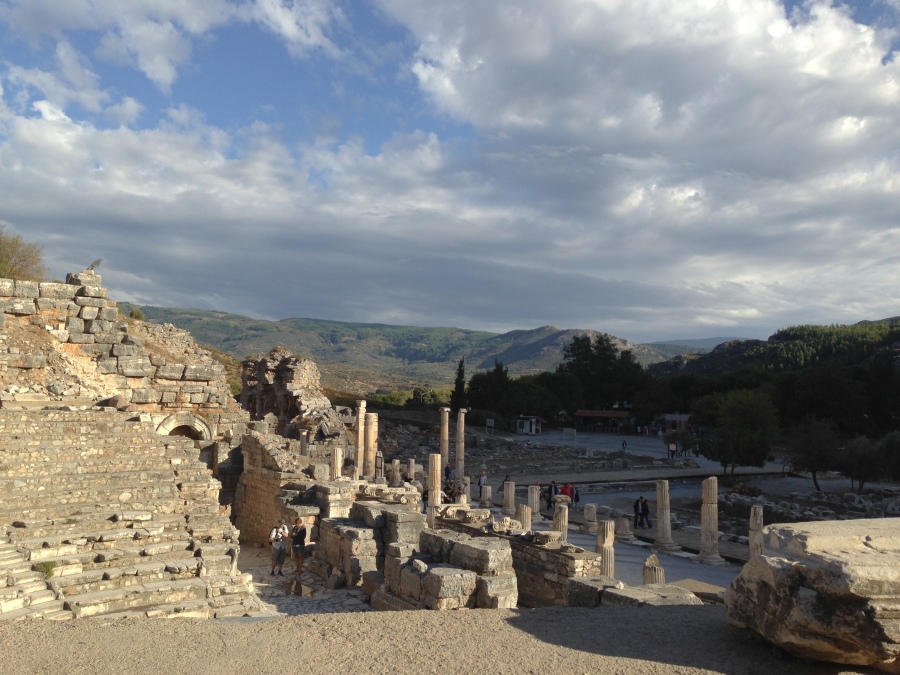 I’ve skipped over lots of details (particularly for the history and architecture buffs (the differences between Ionian Greek and Roman columns, for example, both noticeable throughout the site) and maybe mislabeled some things… going back to write this post was like a going in a time warp back to the site, except it isn’t raining in my office and the view is a little different. Visiting Ephesus is more than overwhelming, with lots of information being thrown at you, and the magnitude of the site and the history it contains was a lot to absorb. I’d like to end the post here, to give you the reader and myself some relief, but the story isn’t quite over….

Once we reached the Odeon, my travel hombre and I turned around and headed back through the site, the way we came to catch our return minibus to Selcuk (downhill this time, instead of uphill). Everything was the same until we were near the Lower Agora and we spotted a sign leading off the trail we were on that said “Church of Mary.” A curious streak and the knowledge that we wouldn’t have time to visit the House of Mary later on spurred us to investigate.

Long story short, though I haven’t found a guidebook yet that mentions this, there is a 5th century church known as “Mary’s Church,” or Mereyem Kilsisi in Turkish, that is located within the Ephesus site! It is also known as the Church of the Councils because it is believed to have been built for the 3rd Ecumenical Council (of Ephesus) in 431. This church was also the seat of the Bishop of Ephesus through late antiquity. Needless to say, Miss RLST nerd was geeking out, and very glad to have been rewarded for getting off the (tourist-trod) beaten path. 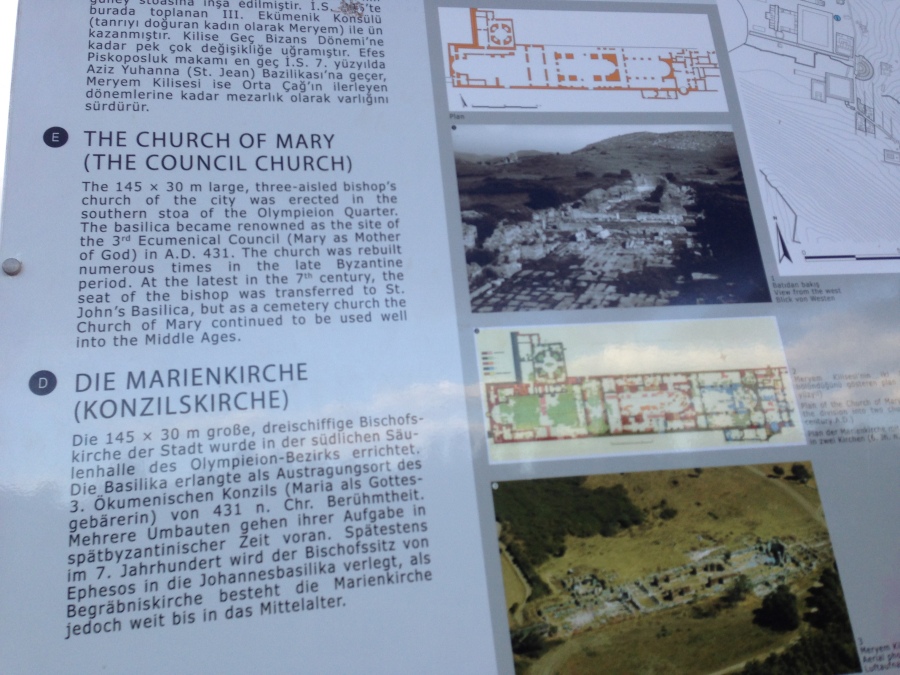 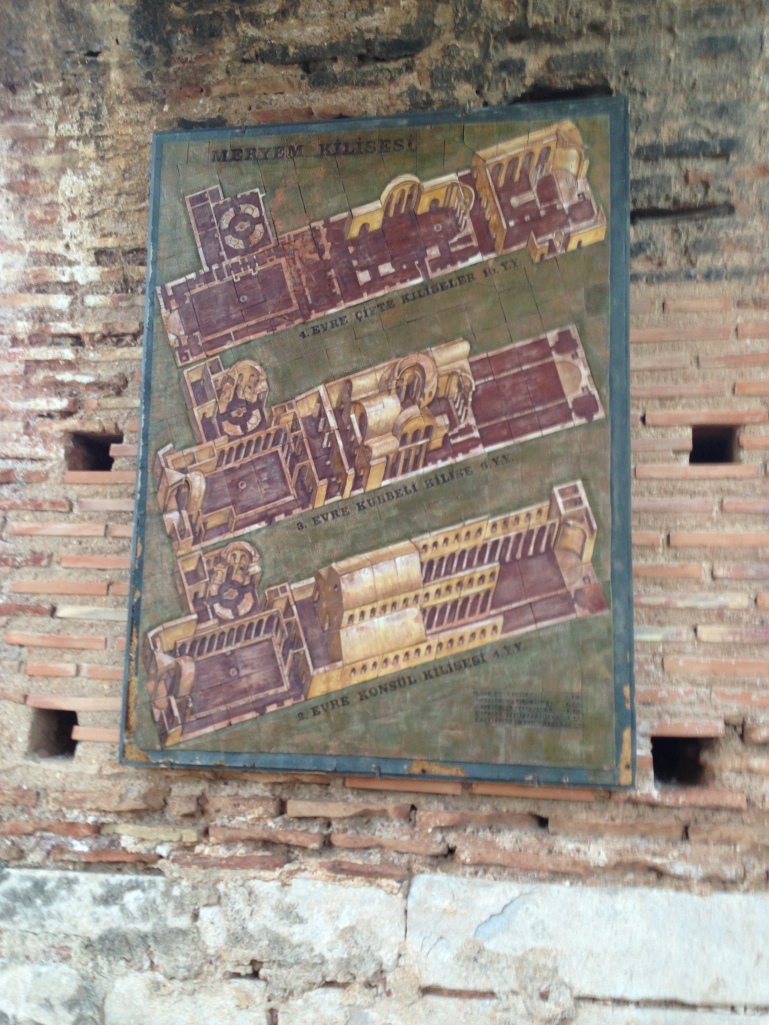 Following our exploration of the church we hopped on a dolmus back to the city of Selcuk, from where we caught another inexpensive minibus to the tiny resort-ish mountain town of Sirince. From Lonely Planet, “Once a Greek-populated mountain village, Sirince’s clustered stone-and-stucco homes, bucolic wooded setting and long winemaking tradition have made it popular…. Legend says that freed Greek slaves in the 15th century resettled here, calling it Cirince (Ugliness) to keep others away. However, by at least the 19th century it had become Kirinje. Under the new republic in the1920’s the name Sirince (Pleasantness) came with the exodus of the Greeks, who largely moved to a village they called Nea Ephesos (New Ephesus) in Northern Greece…. The local alcohol trade [remained], and today you can sample their unique wines (made from raspberry, peach, black mulberry, and pomegranate) in local restaurants and cafes.”

These unique wines were the reason for our visit, and my travel hombre and I enjoyed glasses of cherry and pomegranate wine, respectively, over a delicious dinner overlooking a mountain vista at Sirincem Restaurant and Café. In fact, we joked then and to this day that it was the most the romantic setting for a platonic dinner date to ever be conceived. The wines we drank were made in house by the owner, a fruit farmer, and they brought us a complimentary fruit plate after dinner which quite possibly lived up to the waiter’s assurances that it included “the most beautiful apple you will ever eat.”